AUTHOR’S NOTE:  I started writing this last year and couldn’t finish it.  Here I go again.

I remember.  I woke up in a house that was shared by 8 other guys.  Yes, a frat house.  Okay, NOT a frat house, but as close as it came at Pacific Lutheran University.  One of my housemates said to me when I walked in, “The Twin Towers have been attacked!”

First thing I thought was….the Twin Towers?  Who would want to attack The Big Bossman and Akeem, the African Dream? 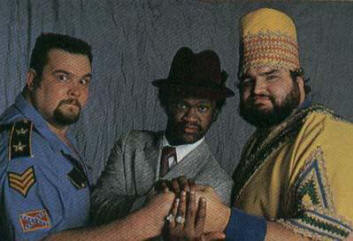 Thank you World Wrestling Federation for muddling my childhood education.  As I had NO IDEA what the Twin Towers were.  Yep, that’s right.  Senior at a Liberal Arts college and I couldn’t tell you about some famous buildings in NYC.  My only consolation is that I know I’m not the only one.

A lot of things went through my head during that day/week/month.  Ironically, the people I cared about most were far away from me.  My girlfriend (now my wife) was in Minnesota.  Both my parents were out of town as well….a plane ride away.  A simple plane ride away, I thought….and now they couldn’t get back to me.  At least at first.  My mom ended up taking jumps here and there and I finally met her and my grandmother in Portland to drive them home.

As more and more facts came out about the attacks, I saw the amazing perseverance of people and also the amazing intolerance.  I had an Afghan professor who was in fear for his safety because of the mass, almost instant, hatred and acts of violence toward Middle Easterners in our country.

Really?  I couldn’t believe it.  I could, and DID, stand behind all of the flags on the porches and the patriotism that followed the 9/11 attacks, but REALLY?  The Iranian down the street that has lived here longer than you is suddenly the ENEMY?  The Indians and, well, anyone of slightly dark to tan color who wasn’t overtly of Hispanic heritage is now a suspect?

I was saddened.  I’m still saddened.  I’ll never forget the bravery of those in the service both here and abroad who helped bring peace of mind to us during that time.  The Police and Fire units are amazing folk.  Our military soldiers are amazing folk.  But the rest of us?  Okay, that’s too general….but you know what I mean.  The ‘rest’ of us who sat back on our recliners, watched the baseball game and condemned anyone different than ourselves.  They should be ashamed.

So, how do I spin this?  How do I turn this into a lesson in perspective?  It’s hard.  11 years later and I still see people giving other people suspicious glances.  Haven’t we learned?  Not everyone is out to get us.  Yes, we got caught unaware.  I believe we learned from that and it was a much needed lesson.  So, stop glaring at your neighbor.  More than likely, they are great people.  You should be too.

One Reply to “Remembrance”